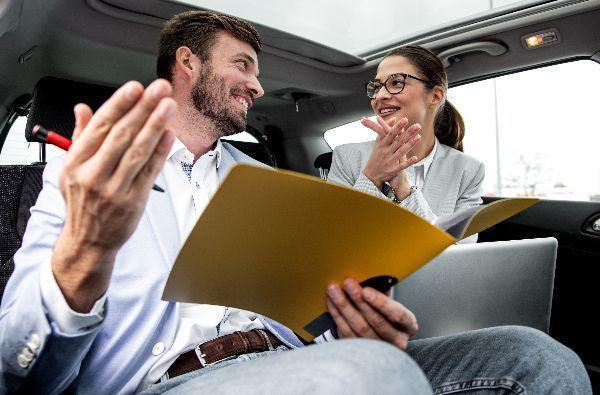 Carlos was in a great mood. Forty minutes in, the meeting with his top prospect’s senior staff was going great. He was getting nothing but engagement, smiles, and positive body language from everyone around the table, including the CEO of the company. He knew what that meant. He was about to close his first big deal! The timing couldn’t have been better. Because this was a potentially major account, Carlos' manager Charlene was in attendance. Today, she would get to see him work his magic first hand.

After he’d finished his formal presentation, Carlos felt relaxed and in the groove. He figured he’d show off for his boss for a minute or two before closing the deal.

He looked at the CEO and said, “Hey, I think we should also talk about the graphic design services we offer. The content creation we’re going to be doing for you to launch your new offering will be a lot more powerful if we make absolutely certain that the visual layout is both compelling and complementary. We have some great people on staff who can see to it that the message and the visuals work well together. Those two things always need to sync up.”

The CEO’s facial expression changed from one of interest and openness to one of caution and concern. The atmosphere in the room changed. Everyone seemed to follow the CEO’s lead, growing suddenly colder and more tentative.

Carlos tried to recover, but the chemistry he had worked so hard to establish was now gone. When he tried to set next steps, the CEO said he wasn’t sure now was the right time to act, and asked Carlos to check back in with him in a couple of months.

“Do you know why you lost that sale?” The voice from the passenger seat of Carlos' car was concerned and supportive. This wasn’t an attack. From behind the steering wheel, as he pondered the massive rush-hour traffic jam in which he now found himself, Carlos shook his head. He had no idea what had happened.

“You answered a question that no one had asked,” Charlene said. “Right at the point where you were making a formal recommendation on how we could work with that client, you introduced a whole new topic...one that I am guessing you had never explored with anyone who was sitting at that table. Am I right about that?”

Carlos nodded. He had never broached the topic of graphic arts work prior to that moment.

“They were all ready to sign with us. Then you threw in a brand new issue, one that nobody at the table had considered. What if the graphics and the text didn’t match up? From the CEO’s reaction, I’m guessing they’ve already got a long-standing relationship with a graphic design team. When you reminded him of how important it was that the text and the graphics complement one another, the CEO realized that the graphics team should have been part of this discussion all along. That’s why he pulled back. You broke a cardinal rule today, Carlos: once you get to the presentation, you focus only on the pain and problems you have already discussed thoroughly--you only talk about issues you know well and know you can solve. You don’t throw in new variables. Live and learn, eh?”

“Yep,” Carlos said. “Live and learn.” He stared ahead at the traffic, which refused to budge. It was going to be a long ride back to the office.

ANATOMY OF A LOST OPPORTUNITY

Have you ever found yourself in a situation where you’ve done a thorough job of uncovering the prospect’s problems, frustrations, issues, and concerns . . . you’ve put together a great presentation based on what you’ve learned . . . you’ve nailed every single point, and you felt certain the prospect was ready to buy from you . . . and then you “improvised” your way into a disaster? You introduced a brand new topic, something you had never discussed with the prospect, and suddenly the opportunity was lost. What you thought was a slam-dunk turned out to be anything but.

The reason you lost that sale should be obvious to you by now: You violated a critical Sandler selling rule. Never answer an unasked question!

Stephanie is the owner of Clydesdale Performance Management and a former Sandler student who has come back into the Sandler Network, driven by a passion to help others sell, deliver exceptional customer service and excel as leaders.
Share this article: