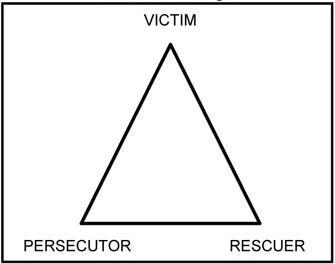 Most of us can recall a time (or perhaps many times) in our life when we have had to deal with a difficult person. Whether it’s a personal or professional relationship, the emotions we feel when faced with these encounters are typically the same; stress, nervousness, frustration, anxiety, etc.

In preparation for an upcoming Customer Service Training Course this fall, I was looking over my notes and came across the Karpman Triangle. Also known as the Drama Triangle, this three-sided geometric figure represents the relationship between two people. Throughout their relationship (professional or personal), the two people move between the three points of the triangle. When one person moves, the other person automatically moves. Both parties cannot be in the same corner at the same time.

The rescuer is a classic enabler. They have a need to help.

The victim’s mantra is "Poor me!". The victim is frustrated, down-trodden and oppressed. They need help.

To help understand this model and the games that can occur inside the triangle, let’s take an example from a customer service scenario.

Vince (Victim) calls Customer Service about the widget that he bought two weeks ago that suddenly doesn’t work. Rueben (Rescuer) in Customer Service takes Vince’s angry call. As Vince unleashes a tyranny of insults against Rueben, his employer and their product, he becomes the Persecutor and Rueben becomes the Victim. The danger is, when we are victimized by a persecutor, we may in turn, take on the role of persecutor ourselves and blame the victim (customer). In this scenario, Rueben gets caught-up in Vince’s emotions and reacts. Customers who start out as victims, move around the triangle then return to the victim corner, will react poorly. They haven’t achieved anything as a result of the call. They are back where they started and they are not happy.

When Rueben allowed his emotions to come into play, he started to play the game. Had he kept them in check, he would have stayed clear of the Victim and Persecutor rules. When our emotions come into play, our ability to rationalize and behave methodically are reduced. When a Customer Service Rep wanders outside of their defined steps to resolve a problem, they can fall prey to emotions. As we have seen in the above scenario, this seldom leads to a satisfactory resolution.

Learning how to control feelings and emotions when dealing with difficult people is a constant challenge for many people. When we have a greater understanding of how difficult people can manipulate our emotions, only then can we take control of ourselves and of the game.

Is your customer service team leaving money on the table? »

Be Friendly with Your Customers, But Never Friends

Too Much Product Knowledge Can Cost You

Is a Good Offense Always the Best Defense?